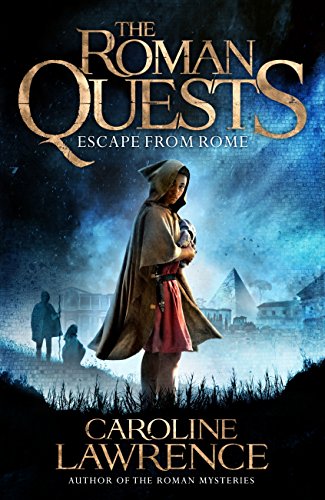 “The Emperor’s men came at midnight.”

This is the opening sentence of Caroline Lawrence’s brand new book ‘Escape From Rome.’ It’s only just been published and I have been hooked on it all week!

It is AD 94 in Rome, Italy. The Flavian Dynasty is coming to its end and the evil Emperor Domitian has scaled up his persecution of people he dislikes. Without warning, those who are believed to have engaged in treasonous activities against the Emperor have their lives, property, homes and money confiscated.

When Domitian sends soldiers to seize his family’s home in the middle of the night, twelve-year-old Juba must escape with his brother and sisters, and journey to distant Britannia on the edge of the known world.

His task: To avoid capture and death.
His quest: To find a safe haven in Britain.
His destiny: To save the children.

When Juba’s mother wakes him in the middle of the night to prepare him to flee with his siblings to their uncle, who lives in far-away Britannia, she ensures they have enough valuables to be able to pay their way. Nothing goes according to plan. One disaster follows another and Juba has to make a heartbreaking decision about his baby sister Dora in order to protect Fronto and Ursula, as well as keeping a dreadful secret from them.

Adventure follows adventure and, when they eventually arrive in cold and wet Britannia, they are older and wiser but find to their horror that their troubles are very far from over. With the help of unexpected and welcome allies, they have to face treachery, betrayal and danger once more. Have they escaped one dreadful fate only to fall into yet another?

‘Escape From Rome’ is a gripping adventure story for children; it has short chapters which end in cliff-hangers – you can’t possibly put it down! In true Caroline Lawrence form, this book is packed chock-a-block with information about Roman times – daily life, gods and goddesses, travel and political difficulties between countries. There is also a brilliant glossary of Latin terms at the back of the book which serves as a good tool for those less familiar with this vocabulary. You can’t fail to learn more about the ancient Roman world from reading this book, I’m looking forward to the next one already!

Ideas for the classroom:

Research the Roman way of life – the baths, houses, politics, food, how far the Empire stretched – it’s all here in the book!

What happens to Dora? How and why does Juba make this decision? How do Fronto and Ursula react? Was it the right thing to do?

Read the part where Juba, Fronto and Ursula discover the slave children in their uncle’s house. What is their reaction? Is their uncle right or wrong to act in this way? How does the discovery of little Audax help them to make and carry through their decision? Put yourself into Audax’s shoes and write in the first person about his experience and how he feels.

Research the lives of Roman slaves. What were they expected to do? If the Roman slaves were born into slavery, do they deserve freedom? What is the history of slavery? Are there modern-day examples? What are the moral/ethical problems with this?

What differences are there between Rome and Britannia? How does Juba’s view of this change throughout the book?

Who is Bouda and who is she related to? Why would or wouldn’t you trust her? What other historical facts can you find about this character and her family?

What other Roman myths are alluded to in the book. What can you find out about these? What are their stories?

In ‘Escape to Rome’, Fronto claimed he could recite the entire Aeneid. (a Latin epic poem, written by Virgil. It tells the legendary story of Aeneas, a Trojan who travelled to Italy, where he became the ancestor of the Romans.) What is this poem? Can you learn and recite any part of it?! Can you write/learn/recite your own poem of a Roman myth/legend?

Other books by Caroline Lawrence include the 17-book ‘Roman Mysteries’ series – characters from this reappear in ‘Escape From Rome’ and it’s good to catch up with them again.

This is a text widget. The Text Widget allows you to add text or HTML to your sidebar. You can use a text widget to display text, links, images, HTML, or a combination of these. Edit them in the Widget section of the Customizer.
%d bloggers like this: