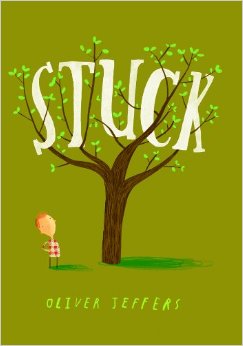 I have recently read this book and I really enjoyed it!  It made me smile lots!

Poor Floyd one day gets his kite stuck in the tree but throughout the story he is determined to get it out.  How will he do this?  Firstly, he chooses an obvious object –  a shoe to throw into the tree to try and get his kite down but annoyingly that gets stuck up there too!  So what does he do next?  Floyd decides to throw his other shoe up there too of course – that also gets stuck!  Surely he can think of something that will get his kite unstuck.  A ladder?  A boat?  His front door?  An orangutan? This book is great because with each page that you read something or someone gets stuck and obviously the character or object is more silly or ridiculous than the one that came before it. However, Floyd has only one thing on his mind and that is to get his kite un-stuck from the tree and he will literally throw anything up there – even the kitchen sink!  This really is a laugh out loud story of a little boy showing great determination to retrieve his kite and the ridiculous situations that happen throughout the story.

This is a great book and the illustrations and story is engaging and the story line is different.  I can imagine younger children in KS1 especially enjoying the book and listening to it over and over again.  They will enjoy remembering and guessing the next object or character that is going to be thrown up at the tree. I can imagine them shouting out the next object in excitement!  The reader will certainly keep wondering what else Floyd could possibly get stuck in the tree.  He really does only have one thing on his mind – to get that kite down so obviously it is a little silly and ridiculous!  Floyd is just being a kid and he is definitely not thinking straight or being logical but that’s part of the fun of this book.

I have to say that I really enjoy any book written by Oliver Jeffers – he has really written some fab picture books!  So if you have not read one yet or used one in your class – this is definitely the time to do it!

Suggested activities to do after reading the book: 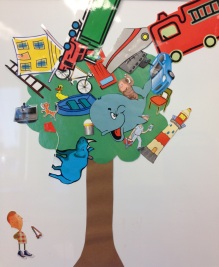 Great book trailer which you could use to promote the book but after you have read the book with your class!

This is a text widget. The Text Widget allows you to add text or HTML to your sidebar. You can use a text widget to display text, links, images, HTML, or a combination of these. Edit them in the Widget section of the Customizer.
Loading Comments...
Comment
×
%d bloggers like this: