The story contains only six words and three points that determine the time of the action. The whole story is narrated by colorful pictures of frogs flying on their lily pads

The story begins on

A group of frogs start their journey at some wetlands – the beginning of their night-time adventure. They levitate among birds that sit on the electric wires; fly next to the kitchen window where a man is eating his sandwich; visit someone’s backyard becoming trapped in their sheets and explore a house where an old lady sleeps in front of her television.

They encounter a dog who tries to catch one of the frogs, but changes his mind and joins their adventure.

Soon after, the frogs return to the pond where they swim and float on their lily pads as normal. Back in the city, people investigate traces left by the frogs.

The final pages of the book show

Where pigs being to hover above the roof of a farm building.

To introduce this book to the children, I told the children they had to become detectives and analyse clues.

I gave the children the following clues which they had to discuss and make bullet points on what they found in each clue.

Once they analysed each clue, they had to write a paragraph explaining what they thought had happened (none of them guessed correctly!)

The next lesson involved looking at the following picture: 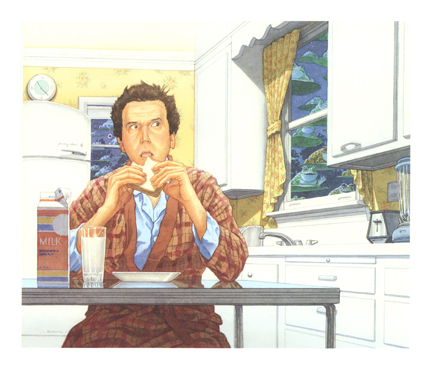 The children have to think about what a ‘good question’ is and write their 5 best questions to ask this witness (who will be in the hot seat).

To put the children out of their misery, I showed them a video version of the book.

(Here is a PowerPoint version)

Then for the final lesson, after discussing the features of a report, the children wrote their own report of what happened Tuesday night.

This is a text widget. The Text Widget allows you to add text or HTML to your sidebar. You can use a text widget to display text, links, images, HTML, or a combination of these. Edit them in the Widget section of the Customizer.
Loading Comments...
Comment
×
%d bloggers like this: